Arnold’s life started when he and ten other calves were purchased at auction by a man who planned to raise them for cheap beef. Arnold waiting his turn at Cornell after his rescue. Longing to go outside these kids were too sick at first, but would soon get to have huge pastures to run. 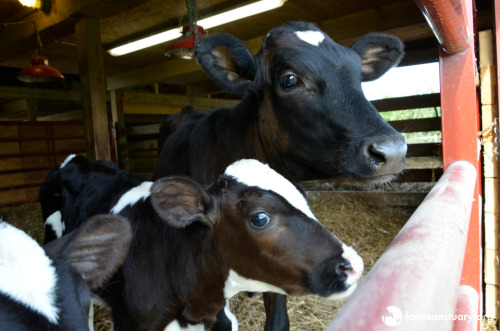 The tiny little Tweed, who is now the tallest, really looked up to and still looks up to Arnold. This group all remains closely bonded. 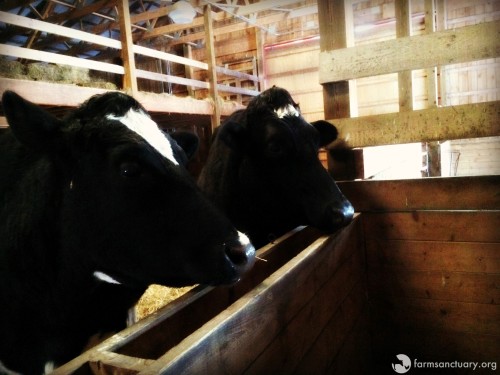 Arnold and Conrad- much closer in size now, looking into the pen at the new arrivals. 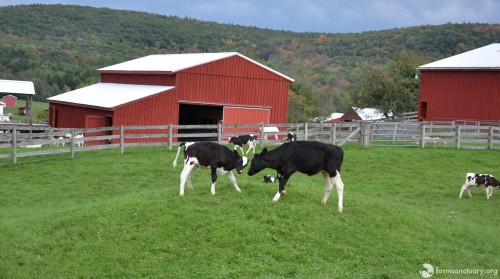 Meeting Sonny our boy Arnold made sure that he would be okay with the smaller cows and quickly established just where Sonny would fit in. Arnold showing me some love. Arnold, who quickly outgrew older pal Blitzen who arrived a year before him, mugging for the camera- or actually just trying to see a calf who had arrived.

The hallway leading to the basement area where the live calves were discovered.

Male calves born to dairy cows are regarded as useless by milk producers and sell at livestock auctions for only a few dollars each when they are just a few days old.

The remaining babies, all sick and underweight, were given hay by our staff.

Even though he had spent so little money to acquire these baby boys, their new legal owner would not pay the few dollars it would have taken to provide them with needed medical care. You see, the calves had contracted pneumonia, and their health was quickly declining. To treat these calves would have simply required a single bottle of antibiotics, since they were all so small. But instead they continued to languish, and their conditions worsened.

Runny eyes and noses, these tiny, exhausted calves are loaded up in our trailer and headed to the Cornell University Hospital for Animals to be checked out.

As things continued to go out of control, the owner did not call a vet or buy the necessary drugs; he instead began to shoot the calves. The neighbors heard the shots and called the police, but by the time they arrived, only five of the eleven calves were still alive.

At Cornell, all calves were diagnosed with severe pneumonia and a few had other health issues like hernias, bacterial diarrhea, and of course dehydration.

When we arrived at the scene, we found a very emaciated, very frightened little herd of boys, all very sick and in need of medical attention.

The then-tiny Tweed and Conrad stayed very close to their big brother. Tweed was one of the sickest of the calves.

And each had a very individual personality.

A tall tween version of Arnold. He has always been super leggy, but was even more so in his preteen and teenage years.

Arnold was the largest of the boys — likely older than the others, but not by much. And he was very quiet and low-key.

Beautiful Arnold looking out at the sanctuary that would become his permanent home.

He was the clear leader of the herd.

He was much larger and much stronger than the others, and his little friends seemed to look to him for protection. Like Arnold Schwarzenegger, for whom he was named, he was, you might say, the “governator” of this tiny little herd.

But that is where the similarities end.

Arnold and his buddies out for a walk in the snow.

In the special-needs herd, the boys all teenagers. From left to right, Arnold, Conrad, Sonny, Milbank, and way in the back you can see Orlando.

Arnold is very quiet, very stoic, and likes to fly under the radar. He was definitely the toughest of his little crew for the first few months, but once he entered the herd he began to lay low. He was also very thin

(and remains so), not filling out as much as some of the others he grew up with.

It’s not easy being brave when you face your first giant. Arnold, unlike some of the sillier younger calves, did not challenge the giant Thunder, but instead was very submissive.

If he were a human, he would never take a selfie, never run for public office, and never want celebrity of any kind. Instead, he seems to wants nothing more than the love of his friends. He will accept human attention, but not often — unlike his human-loving herdmate Orlando, whom he arrived with.

Making friends, Arnold (on the left) meets and falls for his new pals, Moo and Lilli.

He is not a steer that everyone knows, but to those who love him the most — Milbank, Conrad, and Tweed — he is the man. He quickly established himself in the large herd as a friend to all, including many of the older cattle, like Moo, who is also very laid-back.

No longer needing to take the lead, Arnold flies under the radar and makes his life in the big herd very stress-free. Milbank, the first in line, is currently attempting to challenge the herd leader. From front to back, Milbank, Lawrence, Arnold, and best pal Tweed. Chandini walks beside the big boys.

Even with his original crew, he no longer takes the lead and Milbank, originally one of the smallest, has put himself in the position of leader. When they were introduced to the main herd, Arnold was not one who attempted to challenge the others, but instead quickly blended right in.

Arnold with Moo and Bradley.

We’ll never know how what he saw when he was a calf affected him — how the loss of those bovine brothers made him feel — but I would guess it was hard, since he seemed to feel like he needed to protect his younger brethren.

Cute Arnold lying the warm grass soaking up the sun.