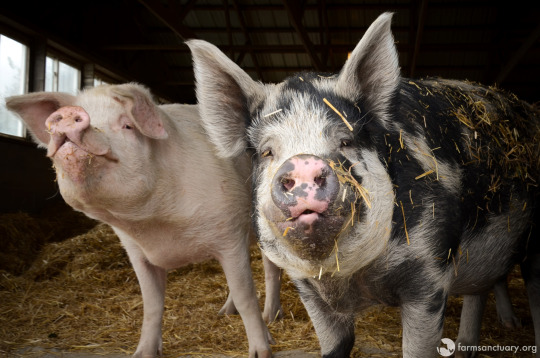 If you’ve read Part 1 of Fiona’s story, you’ll know that this very strong girl suffered some difficult setbacks early in life. But Fiona persevered through illness, the loss of her young piglet friend Linus, and later the passing of Angie, an elderly pig with whom she and her friend Tim formed a special bond.

With Angie’s death, Fiona had suffered another loss, but this time, with Tim at least, it seemed that she would not be alone. But sadly, that was not the case once Emily pig, after leaving the sanctuary temporarily to have surgery on her foot, returned to be with Tim (and by default, Fiona). 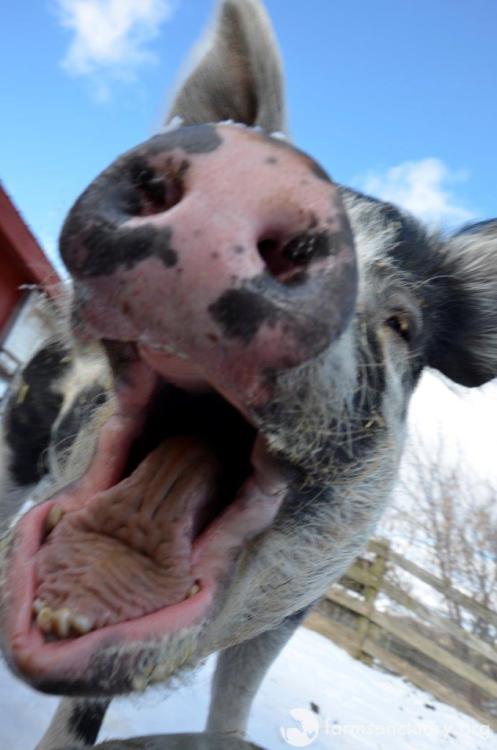 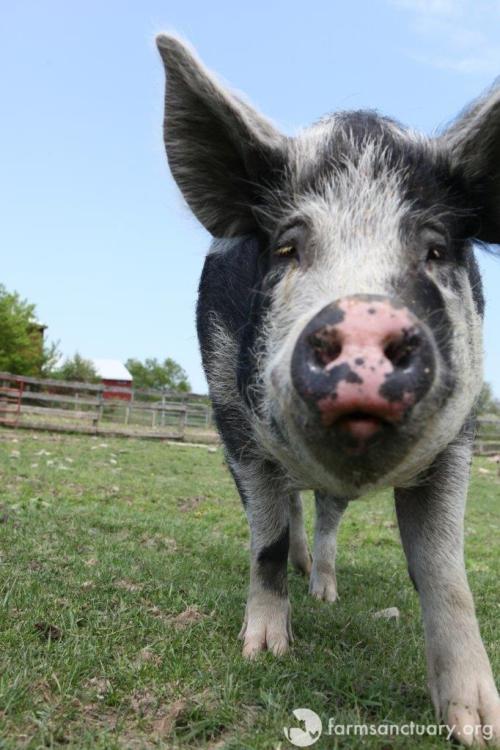 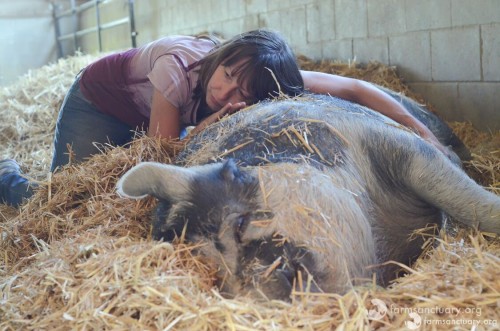 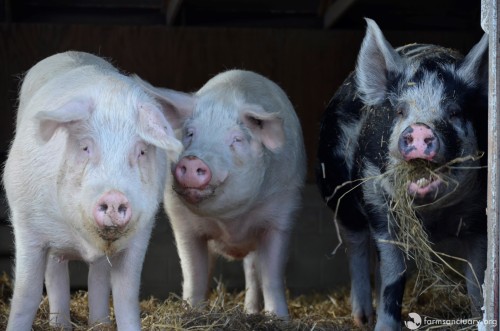 — Fiona was once again on her own.

Emily attempted to get so close to Tim again that a desperate Fiona would squeeze between the two, only to get kicked out completely by the grumpy Emily.

With yet another loss

— that of Tim’s companionship

— we made a decision to place her with one of our adopters, who was looking for a piglet to join her small herd. The pigs were all young, so it sounded like a good plan. But fast-forward to 24 hours after leaving our Watkins Glen property, and it was already clear that this too would not work; the adopter wanted to return our girl. Seriously???

It was time to meet the big herd. Fiona was finally old enough, and had gone through so much in her very short life that we felt she could handle it. And handle it she did.

Fiona meeting Violet and finding it not too bad.

No longer was she frightened of the big pigs, but instead walked right up to them, including the second in command, Violet. This was true bravery. And that bravery paid off.

Fiona made the closest friendship with who doppelganger Joan Jett, and the two have continued to be the best of pals over the past seven years.

She also fell in love with Kim Gordon, who arrived a few years after her and just like Joan, needed a friend.

Girls’ club: Kim and Fiona chatting it up, with friend Joan in the background.

She became a great outdoorsy pig and spent most of her days wandering the pastures with her new pals. She loved spending time out and about and rooting, rolling in the mud, and wading in the pond.

— growing up in her new herd.

She has some health issues, including a mysterious head tremor which she is still treated for daily. Like all the farm pigs, she also has times when her legs and feet get sore, but treatment usually only lasts a short time and she responds well to pain management. She loves getting her daily meds in a peanut butter sandwich! Delicious!

Fiona loves her daily sandwich with meds and would be devastated if they were discontinued.

She is only close to a few people, and is known for being a grump if you wake her from a nap or attempt to make her move or do something she doesn’t feel like doing. She has a pretty loud warning grunt, but this girl’s bark is far worse than her bite, although when her tremors began she did nip a few people. We assume this was due to fear or a visual change that she needed to adjust to, which has since improved. She is back to just being slightly grumpy.

Always looking for love from someone she knows well, Fiona has never showed me her grumpy side personally, but I am very aware it is there.

At our recent Hoe Down event, her grumpiness was pointed out, and many kept their distance

— but Fiona was really just hoping for a belly rub, which thankfully she did get eventually.

Waiting to scare someone away

— Fiona ignoring people at the Hoe Down.

And despite her occasional grouchy behavior, most of the time this gal is all smiles and loving life. And each day she brings all who know her

And despite all the loss Fiona suffered when she was young, she has grown up strong and happy. And like Angie, this pig grew up to accept the young and make sure that they, too, find their place in the big pig herd.

Please share Fiona’s story. Together, we can increase awareness that every pig is someone, not something. With your support, we can continue to promote compassionate vegan living through rescue, education, and advocacy efforts. A compassionate world begins with you!