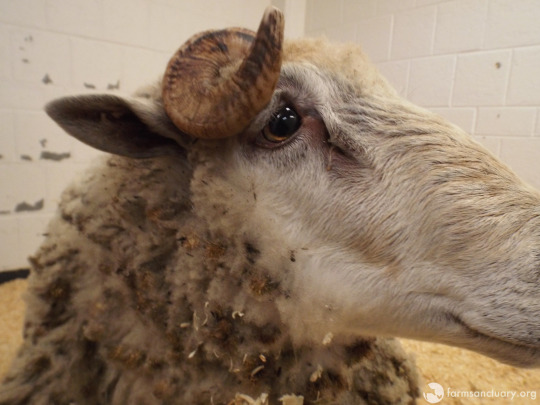 Two years ago, we received a call from our local animal control officer about a “lamb” who had been left on an abandoned property in Schuyler County, NY, where the early arrival of winter conditions had killed off all the grass. When we went to get this lamb, however, we discovered instead an older ram with a whole lot of attitude. 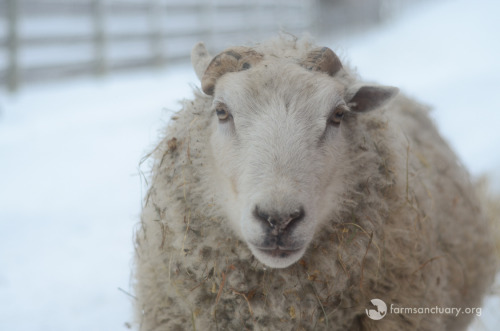 handsome Liam in the snow 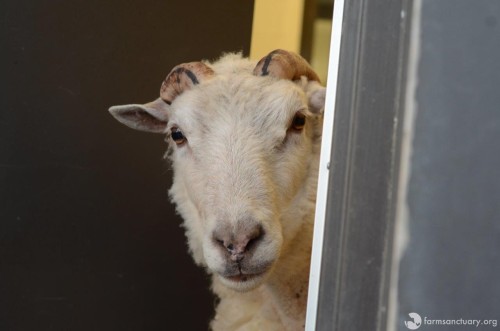 Peeking out at his new world 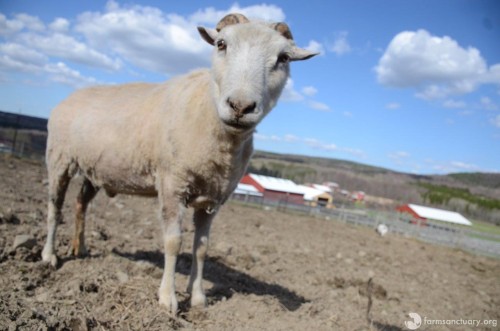 All sheared and ready for the summer 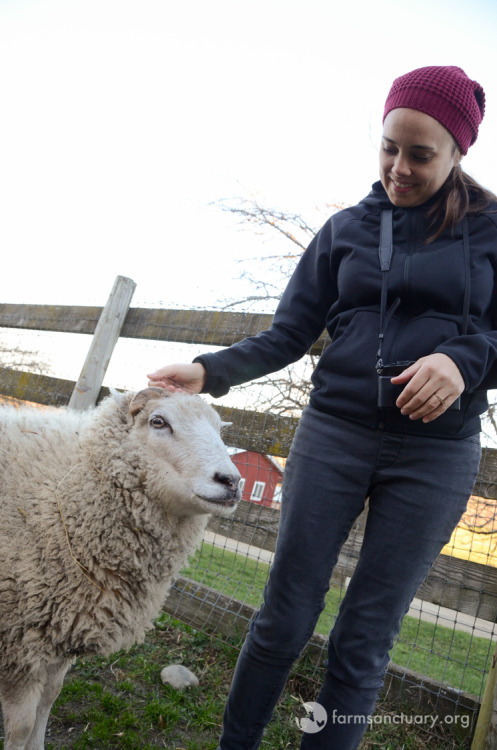 Those are some funny looking sheep.

After getting over the shock of the age discrepancy, we realized that this very assertive boy had some pretty serious health issues. Some of these issues we could easily deal with ourselves — but, besides the fact that he needed neutering, and soon, there was more going on.

Liam was at the Cornell University Hospital for Animals for weeks before he was able come home to our New York Shelter. Slowly but surely, vets repaired the damage wrought on his body by a host of ailments and deprivations.

For starters, he was malnourished. His thick wool had gone unshorn for far too long and was full of burrs and brambles that cut into his skin. His horns were growing into his face and pushing on his eyes, requiring intervention.

Showing hole in the urethra after first surgery.

He was limping, either from a broken leg that had healed wrong or from an untreated case of septic arthritis. Most alarmingly, Liam’s urethra had burst, creating a hole in his body cavity — so that urine dripped from his abdomen, and his skin was burned and ulcerated from the acids of the urine.

During his time at the hospital, Liam received blood transfusions from two other sheep for anemia. (They are now all friends — recipient Liam and donor siblings Katherine and Will.) Because of his urethra trauma, he had to undergo urethrostomy to create a permanent opening in his urethra. The surgery carries a risk of complications, so to this day we carefully monitor Liam.

But two years later, he is going strong, with no further health issues from his surgical site.

And although he arrived with some serious anger issues, those have turned into play, love, and a need for attention from his human companions. Though he will still sometimes gets into a squabble with a goat or a fellow sheep (during which he is pretty relentless), he has definitely mellowed from the time of his arrival.

Proof that everyone who works on a sanctuary needs a LifeProof phone case!

And in his two years with us, we have discovered a few important things about our boy:

Getting a head scratching is the highlight of Liam’s day!

Now that Liam has had enough time to become Liam, he doesn’t know a stranger. Instead, he greets each person he meets in the manner in which he approaches each day, with enthusiasm and joy.

Liam is a huge personality — a true character. And today, which also just so happens to be National Hug a Sheep Day (very fitting for this boy who loves the hugs), we say thank you to a boy who brings us joy each and every day!

Please share Liam’s story. Together, we can encourage awareness and understanding that every farm animal is a unique individual with a rich emotional life. With your support, we can continue to promote compassionate vegan living through rescue, education, and advocacy efforts. A compassionate world begins with you!