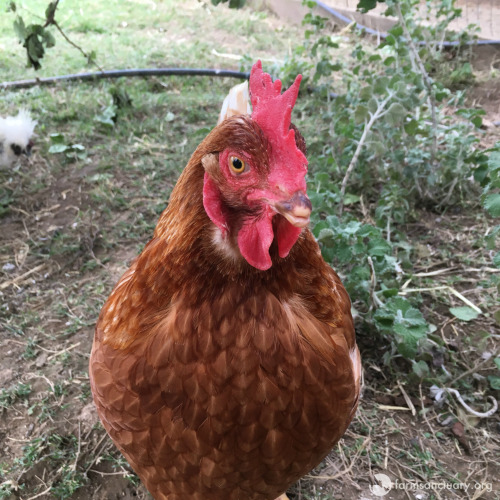 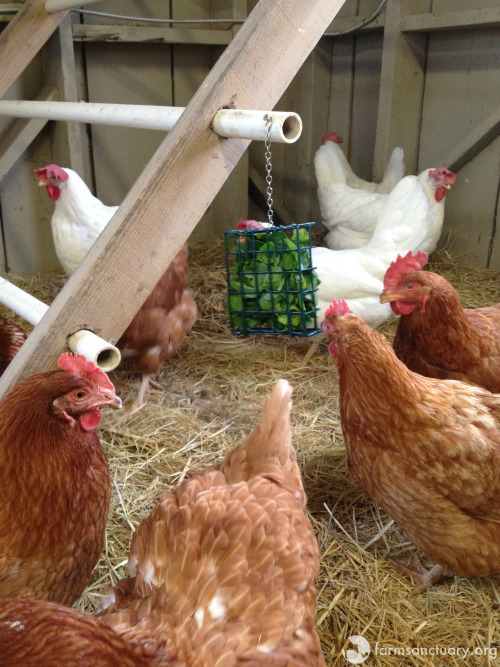 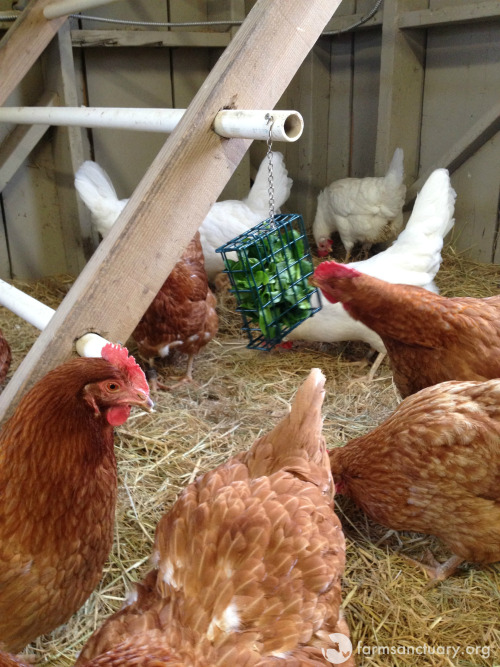 Missy: From Hell on Earth to Sanctuary at Last

Fifty thousand: That’s how many hens were left in a factory farm in Turlock, CA, abandoned without food or water for two weeks — left to die. Farm Sanctuary, along with Northern California sanctuaries Harvest Home and Animal Place, were granted permission to go in and and give 2,000 of the birds a second chance at life.

“We took just over 400 hens this week, some Leghorn and some Brown chickens. Thirty have not been able to stand without falling since I arrived… the Leghorns should weigh about four pounds, and all weighed less than one pound… They seem to take comfort in being given fluids and being hand-fed. Some of the sickest are pulling through. They are eating and drinking on their own after the first three days of fluids, tube feedings, injectable vitamins, and trying different types of foods… We’ve checked every one of the birds individually. They are coated with poultry mites; these cause anemia and are extremely debilitating to animals in such critical condition. Today all were treated, and the mite-coated feathers were trimmed out. Most of the girls are so exhausted and sick, not one has laid an egg yet. Even ‘spent’ hens lay tons of eggs, so this is really unusual… they thrive on the sun, and they’ve been able to sunbathe for the first time in their lives!”

—National Shelter Director Susie Coston, writing from the field in 2012

Farm Sanctuary brought more 400 of them back to our Northern California Shelter for rehabilitation and care. The birds needed critical and round-the-clock care from sanctuary caregivers and volunteers.

“During the first few days following the rescue, many of the hens needed fluids and tube feedings… some were even presenting signs of renal failure and shock. Unfortunately, for some of the hens, too much damage had been done — their frail bodies were shutting down. By the end of the first week, however, most of the remaining hens really started to perk up, and they continue to grow stronger and more active each day. In the beginning, if we found a hen lying on her side, it was because she was too weak to stand. Now, if we find a hen on her side, it’s almost always because she’s dust bathing or basking in a beam of sunlight!”

It is unimaginable what these these birds went through; we cannot fathom the despair, fear, and hopelessness they endured before coming to Farm Sanctuary. They must have felt a profound difference upon entering the sanctuary, where they suddenly had soft bedding to sleep on and room to stretch, walk, and even run when they were healthy enough. They had dust to bathe in, a barn to sleep in, and a blue sky to relax under during the day.

“On warm days, we open up the door to the yard. At first, no one wanted to go outside. Finally, one brave hen ventured out, followed by a few more. Now, every day, more of the hens seem interested in going outside to explore their new surroundings.”

What must have been like for them feeling dirt between their toes for the first time, looking up and seeing a blue sky while feeling the warmth of the sun? Being able to stretch out their wings and feel the breeze on their sensitive skin and feathers — something they had never before even known had existed? It must have felt like a dream.

Every single one of these birds has a unique personality, and Missy is no exception! Missy is a Red Star chicken and one of the more than 400 birds who came to Farm Sanctuary following the Turlock rescue. For the first time in her life, she was able to be free and safe, seen as an individual and not just a commodity for production.

Missy has become one of the more outgoing of the Turlock chickens. She is very inquisitive, and will often run up to staff and visitors to check them out.

She is currently on anti-inflammatory medication twice daily because she suffers from a reproductive health issue, like so many of the other ladies rescued from the factory farm. This medication keeps her comfortable, but she also has to be on antibiotics frequently for infections caused by her health issue, which is called egg yolk peritonitis and is common among hens rescued from the egg industry.

Missy is medicated and examined by caregivers on a daily basis to ensure that she stays as healthy and happy as possible. She does not seem to mind this, though; often she will look at us after we are done giving her medication, as if to say, “Okay, and now it’s belly rub time, right?” (She is right, of course!)

Missy is always one of the first to always check out any new enrichment items or treats in the barn. She is extremely intelligent and will examine and work through how to solve any puzzle!

Missy is an amazing and unique bird who is loved deeply by everyone who cares for her. Four years and four months after Missy and all of these amazing birds were rescued, they still amaze us daily with their resilience and love of life. It is nearly unbelievable that they survived what they did, but the best part is that they are no longer just surviving — now they are living.

Please share the story of Missy and her friends. Together, we can encourage awareness and understanding about the rich emotional lives of birds like her and make a difference for all farm animals. With your support, we can continue to promote compassionate vegan living through rescue, education, and advocacy efforts. A compassionate world begins with you!