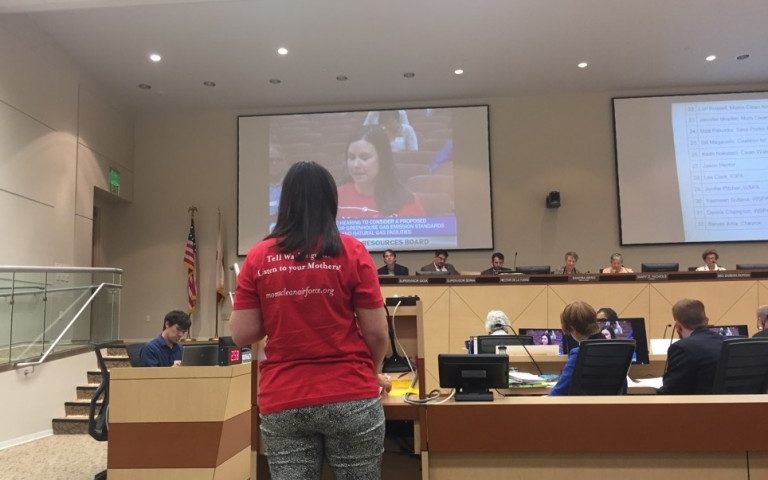 Last month, lifelong Kern County, California resident Felipa Trujillo discussed the health impacts her community, located near oil and gas operations, has experienced. “It’s the most contaminated place in the country. I have witnessed many children getting cancer and asthma, and would like to leave a positive future for my grandkids.”

Trujillo was one of over twenty witnesses that appeared last month before the California Air Resources Board (CARB) to testify on the need for strong statewide rules to reduce methane pollution from the oil and gas industry. During the meeting, Board members heard about the importance of the rules from many powerful witnesses, ranging from concerned mothers and fathers, impacted community members overburdened by poor air quality, nurses who consistently treat asthma patients, industry experts, and air district agents from throughout California. st methane leaks in U.S. history right in their backyard. “A month prior [to the Aliso Canyon leak being reported] my daughter Emma, 22 months at the time, began showing signs of asthma. Two months after the gas leak was reported, my daughters were diagnosed with acute exacerbation of asthma,” described Porter Ranch resident, Jaqueline Shroeder, calling on the Board to take swift action in approving strong rules.

The oil and gas-rich lands of the San Joaquin Valley and the South Coast Air Basin, where Trujillo and Shroeder reside, respectively, have been some of the most productive energy fields in the country over the last century. However they are also among the nation’s most polluted regions. These districts consistently fail to meet national air quality standards for criteria pollutants, like smog-forming ozone, and have been the subject of much debate over pollution control and its adverse effects on residents.

Regulating methane is critical for the health of these communities because standards that reduce methane emissions from oil and gas development will simultaneously reduce levels of smog-forming volatile organic compounds (VOCs) and hazardous air pollutants.

Now, by proposing the strongest oil and gas methane standards in the nation, California has taken a big step forward in reducing the climate concerns associated with oil and gas methane pollution, and protecting the health and well-being of its residents.

While poor air quality affects all California residents, disadvantaged communities are disproportionately burdened by pollution from the oil and gas industry, and can therefore especially benefit from these rules, a fact that Chair Mary Nichols acknowledged in her opening remarks. “Many oil and gas facilities are located in or near disadvantaged communities and this regulation will reduce over 100 tons per year of toxic emissions that have an impact on those communities.”

In California, people of color, particularly Latinos, are most affected by oil and gas pollution. Of the 1.3 million Californians that live within a half mile from an active oil and gas facility, over 500,000 are of Hispanic origin. Latinos make up 45% of the worst smog regions of the state, and, nationwide, Latino children are more likely to have asthma, and those with asthma are twice as likely to die from an asthma attack, than non-Latino whites

During the discussion of the rule, the importance and impact of strong community voices became clear.  Board member Phil Serna remarked “This is an opportunity that requires us to reflect back on our mission as an agency which is first and foremost to protect public health. [Methane] has a very strong health component and I’m very glad to hear folks give their very relevant testimony of what it is like to live next to [oil and gas] facilities.”

At the close of the meeting the Board unanimously voted to proceed with the strengthened methane rule, which is on track to be finalized in January. While the Board sent a definite signal that a strong rule is on the horizon, there is still work to be done to ensure the final rule is as robust and effective as possible. A public comment period that begins this fall will afford community members one last opportunity to ensure their concerns are heard, which is why it is critical for impacted communities to continue demanding regulators approve strong rules.

Despite the work that remains, last month’s CARB Board meeting gives a reason for optimism about the future of California’s climate, and the public health of its communities. As Kern County resident Juan Flores stated in his testimony to the Board, “Today is a landmark day … and I will be happy to go back to my community and say, ‘We won’t hear excuses anymore. Now we have a clear plan for protecting our health.’ ”