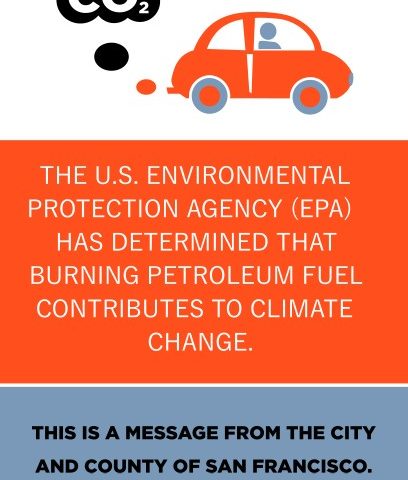 There are three cities in California that have drafted legislation requiring gasoline pumps post a ‘climate risk label’ to consumers. These “Warming Labels” would disclose the climate change dangers of greenhouse gases, and air pollution, from the petroleum-based transportation fuels we consume. In addition, there is also a Canadian effort, with the City of North Vancouver becoming the first city in the world to pass this legislation into law last November (we should expect to see climate change labels on gas pumps there soon!). We consider transparency at the point of sale a natural progression towards a clean energy future; the long term dangers of greenhouse gases from our burning of fossil fuels is well established, but because these dangers have a time delay- we don’t see the climate change impacts in real time when we consume these fuels- point-of-sale labels become a valuable source of feedback. Much like any warning label, they are designed to alert consumers to a danger in a product that can’t be seen, in order that consumers can make better choices over the long term. It’s time to be realistic about human nature~ for better or worse, we are wired to deal with clear, immediate dangers, not one’s happening sometime in the ambiguous future. Climate change information tends to reach people least likely to need it. Our proposal would send a consistent message to all consumers of gasoline. The labels would fill in the gaps of perception at the point-of-sale: they would signal immediately that fossil fuel consumption is a long-term threat to human health and welfare from the impacts of a warming atmosphere, and counteract our human tendency to ‘discount’ these dangers. Regardless of whether we already understand that fossil fuel consumption leads to climate change, we all tend to favor our immediate needs, “discounting” dangerous future consequences even if we understand them. This occurs not because we don’t care, but because we evolved to respond to immediate threats. However, we are also capable of caring about the future, so bringing the future into the here and now, “future intelligence”, is one of the primary goals of this strategy in order to counteract our more basic instincts.

Addressing our own personal role in the problem of greenhouse gas emissions is a key component of this strategy. Breaking the spell of fossil fuel consumption will require an understanding that our own personal role in the problem matters, and research shows that this “priming” of personal behavior is more associated with taking action. The resulting changes in how we perceive risk, by making it more personal and proximate, will alter how we perceive our own role in the bigger problem. The labels would reduce the big issue (transportation emissions and climate change), the source of which has diffuse origins, down to our own small, personal consumption of gas. Beginning this process of “denormalizing” this consumption, is the beginning towards accelerating increased demand for low-carbon transportation alternatives, and policies that would support them. Will the labels make us immediately ditch our gas-powered cars? Probably not. More likely, it’s this changing of social context around our “normalized” consumption of fossil fuel that is a precursor towards a more serious consideration of alternative solutions.

California’s largest source of greenhouse gas emissions, indeed the entire U.S. now, come from transportation. These emissions represent a demand-side problem; emissions are mostly determined by the kinds of transportation choices we make, and will only go down when we create robust markets for clean transportation. But what comes first; markets or new technology?

The need to slow demand for petroleum fuels, and to eliminate them altogether, is absolute and unequivocal. Simply put, fossil fuel consumption is not safe. Certainly better alternative vehicles and policies need to be implemented in order to do this, but this fact remains. We argue these solutions will be accelerated in an environment where perceptions of risk around continued fossil fuel consumption is more in line with the science. For the first time, we have a small carbon price on transportation fuels via Cap and Trade rules; integrating a carbon price that reshapes markets, one that actually reflects the “true cost” of carbon, over the long term, represents a political test of will. This proposal would support the State’s goals to reduce transportation emissions by bringing the far-off consequence of personal fossil fuel consumption, the invisible threat of greenhouse gases, into the here-and-now. Changing the way we view the relative dangers of fossil fuel consumption in this way, both personally and socially, will help create more supportive environments to deal with the problem.

Here in California, Governor Jerry Brown wants to cut fossil fuel use in cars and trucks in half over the next 15 years. The SB 350 goal was defeated last year by the oil lobby here in California, but we see a way around this. Forcing big oil to disclose these dangers to the public will help settle the issue about the relative safety posed by the consumption of fossil fuels. As you can imagine, the Western States Petroleum Association (WSPA), California’s main oil lobby, isn’t thrilled about our idea. They have threatened to sue, and claim the labels violate their First Amendment right to free speech. Cities, they claim, “cannot force gasoline service stations to make statements advancing the political opinions of the City and State regarding the alleged impacts of greenhouse gases”. The causes of the current climate change we are observing, according to WSPA, “represent some of the most contentious issues in existence today”. Really?

Disclosing “carbon costs” from consumption of fossil fuels to consumers is socially, the beginning towards decarbonizing our economy. We know human nature, people can’t respond to abstract dangers they can’t see, so our label proposal clearly illustrates the problem. If our proposal goes to court, and it most likely will, it would set an important legal precedence. Society is in a crossroads on the issue climate change and fossil fuels; the science is in, so now its important to define the rules, and capitulate on them. We want the Western States Petroleum Association to explain to the court, and the American people, that fossil fuels don’t contribute to climate change. We want them to say the evidence for this is “contentious”, and that the science of climate change represents a “political opinion”. And then, we want the scientific community, and the courts, to weigh in on the evidence.

Jamie Brooks is the United States-based campaign manager for the Think Beyond the Pump campaign in partnership with the Canadian effort Our Horizon.  He is currently a graduate student in Communications Studies at SFSU, researching the role of communications as part of a mitigation tool for the climate crisis.  He lives with his husband in Oakland, CA and their beloved dog, Ellie.
Twitter: https://twitter.com/BeyondPump  Facebook:  https://www.facebook.com/GlenviewCarbonProject/   Website:  http://ourhorizon.org