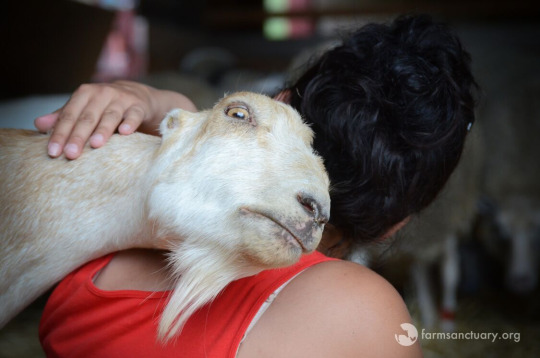 Cynthia goat has obviously not forgotten where she came from and what losses she suffered. This is clear with every gesture she makes — not because she cowers in fear the way she did when she arrived at Farm Sanctuary (those days are behind her), but because every day is another day for this gal to show us how thankful she is to be with us. 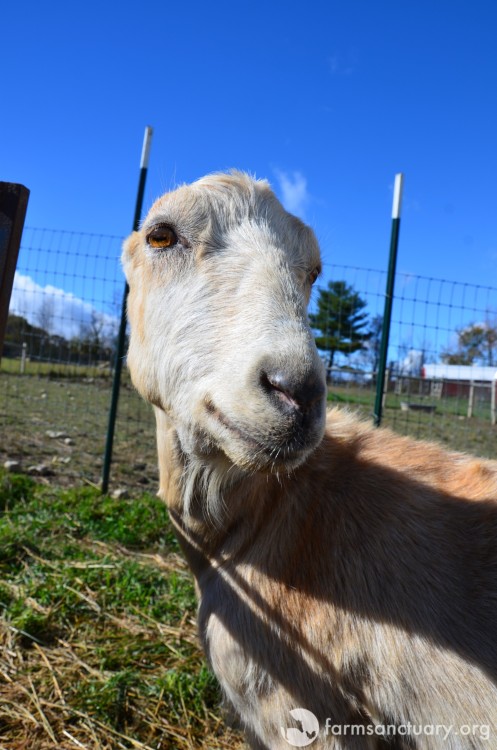 Still very weak days after her arrival, Cynthia had not realized that she was safe. Up close and personal. Cynthia is always right there to greet you! Cynthia loves to wedge herself behind things- like gates. She loves the snuggle. Love to her sweet son who is no longer the sickly kid we took from the farm in Hudson Valley. 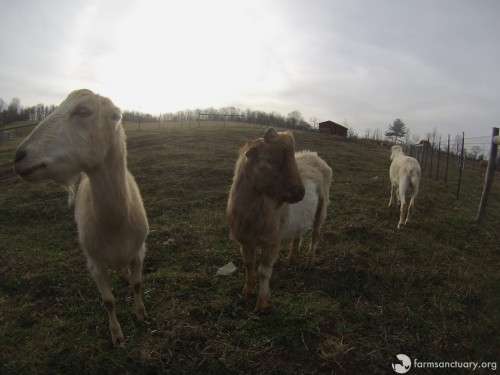 Cynthia left with the kids Bruce and Shannon a few months after their arrival. Mom and daughter standing up to eat hay. Seems to be a genetic thing.

Here Cynthia shows Ben how happy she is to be at the sanctuary and to have so many human friends who love her.

This little LaMancha girl arrived lice-covered, anemic, weak, and quiet — but underneath it all, she had a spirit that we couldn’t see at first, but which now emanates from her like heat from the sun.

Veronique and Hope getting the love from Cynthia and Jordan (Roger and Bruce feeling a little lazy).

LaManchas are a dairy breed, but at the Hudson Valley farm from which she was rescued — a backyard butcher — Cynthia was instead used as a breeding goat, and her babies were either slaughtered on site or the females were used, as she was, to produce more babies.

On a halter, being checked out by the Hudson Valley SPCA before we loaded her up to come to her new home.

Now at Farm Sanctuary for one full year, the real Cynthia has emerged, and she is all about the love.

Showing the love to the King of Vegan Doughnuts, Dan Dunbar of Dun-Well Doughnuts is the receiver of gratitude — and she didn’t even get to sample any of his wares.

When we arrived at the scene in Hudson Valley, many of the goats were weak due to severe anemia, Cynthia’s son Bruce being one of the sickliest of the group. And Cynthia stayed close to his side, so as we loaded him onto the trailer, she was next in line and the two were able to find sanctuary together.

When we arrived at the site of the rescue, Cynthia’s coat was the first evidence of her overall state of health — which was poor.

Bruce was so weak at the time of their arrival at Farm Sanctuary, he would sleep much of the day away with his head on his mother’s back. To be able to be safe and with her family seemed to be the best medicine for Cynthia (that and actual medicine, since she was very sick, too).

A very weak Bruce leans on mom to sleep.

We find that keeping loved ones together makes the healing process go much faster, so we were careful to watch first and see who was connected to whom when we took in the animals in Hudson Valley.

We also took another beautiful LaMancha, Shannon, who also clings to Cynthia like a daughter (although she is at least a year older than Bruce). The three clearly remain a tightly bonded family, and Bruce especially is never too far from his mother’s side.

The family: Bruce at left, Shannon in the middle, and Cynthia on the right when they first joined the main sheep and goat herd.

Cynthia is now smaller than her son, who is no longer sickly, but still a real mama’s boy!

And besides being grateful, Cynthia is also quite playful and bounds down the pastures like a young kid.

Cynthia, right, at play with Bruce.

She loves attention from humans and hugs her neck around you or rubs her head on your face. She also will give you a playful whack with her leg.

Still showing the love to a mystery guest and there is always more to give.

But every day is a celebration for Cynthia, and a new chance to show the world how happy she is to be living the Farm Sanctuary life!

Cynthia enjoying an apple snack in the pasture with her friend Skye.