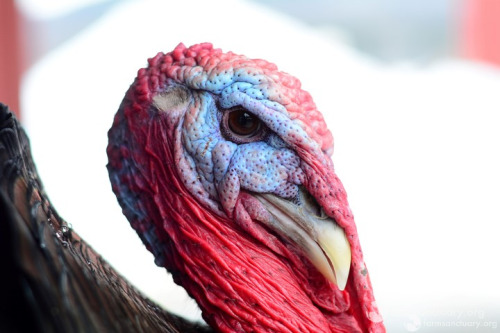 Almost two years ago (his rescueversary is in a few months), I got a phone call from Mike Stura of Skylands Animal Sanctuary and Rescue about a male turkey needing a home. 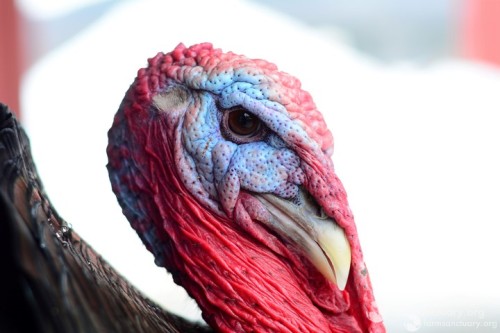 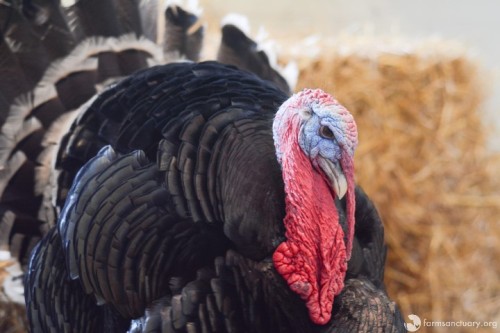 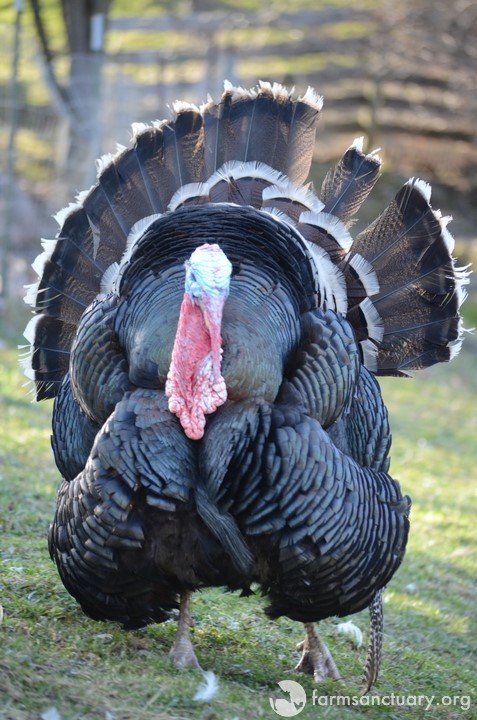 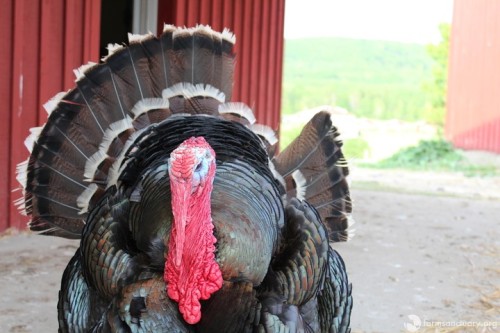 There is no end to the beauty of this bird. 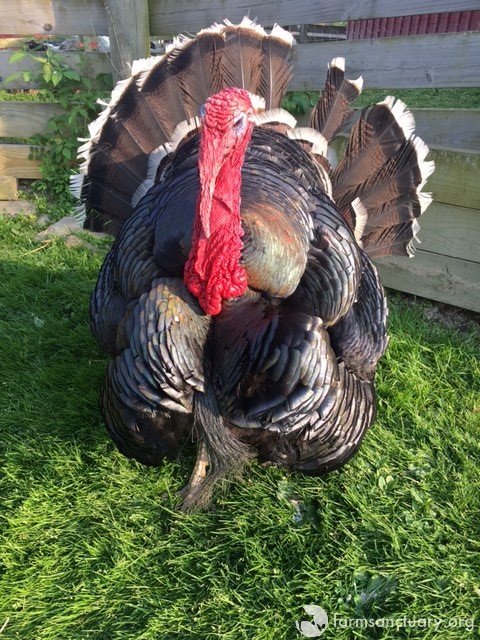 This is one good looking guy! Tara and her new buddy- photo taken minutes after the video below. 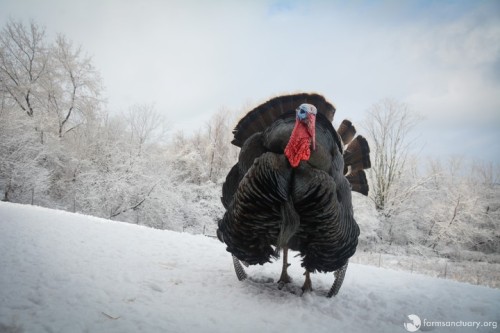 Sadly, we were at male turkey capacity.  The Toms are not as easy to house as the gals for a two primary reasons:
a) Their massive size. They cannot be with the females because they actually can severely injure them

(hence the fact all commercial turkey breeding is performed through artificial insemination).

b) Aggression. Toms can be territorial and will often fight with other males, especially if new birds are introduced to an existing flock.

Turpentine was a fixture at our New York Sanctuary and will forever be missed.

For these reasons alone, I didn’t think we could take in a new turkey. But I had been preoccupied with another matter: Our superstar resident turkey and the love of our lives Turpentine, was recovering from surgery to remove a large mass in his chest. He’d been diagnosed with heart issues after struggling to come out of anesthesia, but he seemed to have made a full recovery. Unfortunately, that was not the case, for just moments after I hung up the phone, Turpentine was found deceased in his barn.

Sweet and docile in this shot; when Hank first arrived he was a bit skittish and a lot more assertive.

Turpentine’s passing was devastating; like a hole that we knew could never fully be filled. But it meant that we would now have room for another male turkey, and we could give a new life to Hank, who, just like Turpentine when he arrived, needed a place to go.

Could turkey Hank have ever dreamed that a mason would come and save him?

A bit of backstory:  Hank’s rescuer (who name is Hank Ringma) is a mason. At the time of the rescue he had done some work at an area slaughterhouse, and on Sunday he had returned for payment.

Hank arriving at our NY shelter with new buddies Tara Hess and Mike Stura: From slaughterhouse to sanctuary in less than 48 hours.

As he waited, he noticed a handsome, male turkey. Hank happens to love turkeys. He and his girlfriend Frannie Laurita (superhero animal rescuer) had visited our New York Shelter and joined us at our Celebration for the Turkeys. He’d absolutely adored Turpentine. So when he saw this bird at the slaughterhouse, who looked rather like a smaller, younger version of his friend at the shelter, human Hank couldn’t help but go over and pet him.

It turned out that the young turkey was sociable and enjoyed the attention. As he interacted with his new buddy, Hank asked the slaughterhouse owner about him. The owner, who of course had intended to kill the turkey for meat, admitted that he was having trouble going through with his plans. The turkey was just too nice.

Who couldn’t love this face?! And if you don’t know why my colors are so amazing, you should read the turkey facts post here.

Hank phoned his friend Mike to see if he had a place to take their new friend, and Mike, in turned, called Farm Sanctuary.

Mike telling us the story of Hank (the turkey, not the man).

And just as Turpentine had so endeared himself to the farmer who raised him that the man couldn’t bear to kill him, this turkey had made a slaughterhouse operator hesitate to go about business as usual. And just as a kind neighbor and humane educator,

Rene Corinne Morton, had convinced Turpentine’s farmer to relinquish him into her care, Hank persuaded the slaughterhouse owner to give up this turkey and let him live.

Hank is a very proud bird and loves his new life!

There was no missing the arrival of our new resident, who we obviously named Hank after his rescuer. He definitely made his presence known. (In the video below you can also see why it is imperative not to startle a young male turkey, who will often break into flight much like his wild cousins. Unlike the wild cousins, however, industrial turkeys like Hank, a broad breasted bronze, weigh over 35 pounds at the time of slaughter.)

No one was hurt (well, not seriously) in the making of this video.  Like his wild cousins, Hank had the ability to fly when he was not as heavy as he has become since he is full grown. But being in the line of fire of this flight is not always pleasant.

And after a quarantine period of 30 days, clean bill of health, wing clipping (not painful, I promise) to keep him grounded and getting him used to his new humans, we tried Hank in our turkey barn pen, next to the ladies, where Turpentine used to live. However, our new boy decided in the middle of the night that he would put all his energy into getting over the five-foot wall to meet those new lady friends. Two of the girls suffered minor scrapes. It was clear that this space would not work for our boy.

Hank is always missing a few of his tail feathers, no matter how many times he has grown them in.

Another big difference between him and our free-roaming friend Turpentine was that Hank is not a huge fan of male humans (his namesake being an exception). After proving this point to male staff members it became evident that Hank was his own turkey with his own needs and that the duck and goose barn would be the best location for him. .

Although he is not a huge fan of the men, Hank loves the ladies.  Here, Hank is showing off, although no one seems to be paying attention, to me, Hope, and Veronique.

Hank is someone new, an individual growing into his own, unique personality. He is not a replacement for Turpentine but, in a way, the inheritor of his office — a new representative of turkey-kind to strut into our lives and insist on being seen (and heard). Just with a slightly different method.

Hank spends the majority of his time strutting for his people fans and being very protective of the chickens, ducks, and geese who are his roommates.

He is an incredible guy who strutted his way into our hearts and who even from a distance draws admirers who come to our New York sanctuary and lets everyone who meets him know that turkeys are sentient beings and our friends, not our food.

Like the mailman, neither snow nor rain nor heat nor gloom of night can keep this boy from strutting his stuff.  And we are happy to have him do it.