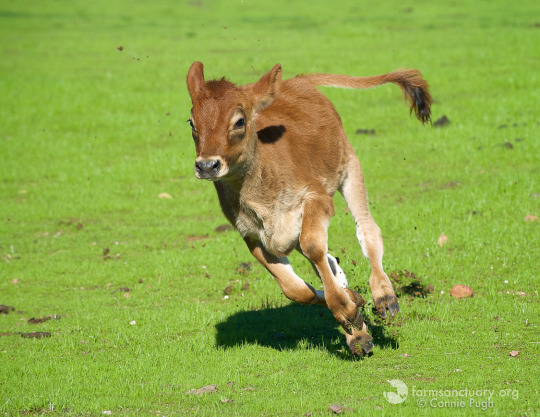 Meredith’s life began onscreen; she was born on the set of “Utopia,” a Fox reality series. Her mom Honey and aunt Betsy had been purchased by the show’s producers to be used for their milk on the show. Both cows were pregnant at the time of their purchase, and Meredith (whom the show’s contestants dubbed “Ca$h” — a telling name) was born during the series’ run. 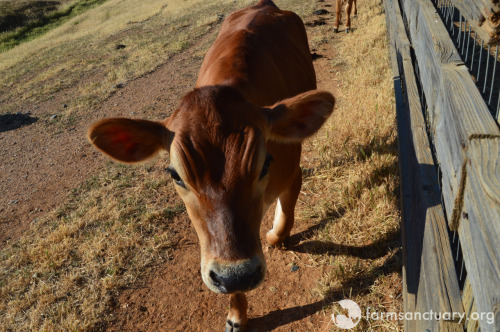 Little Meredith on the way to our Northern California Shelter.

When the show ended, Meredith, Honey, and the still-pregnant Betsy faced the prospect of being sent back into dairy production. Fortunately, the show’s veterinarian advised against sending the family back to the bleak existence that is the norm for cows in the dairy industry. Producers instead sought a happier home for the trio, and their search led them to Farm Sanctuary.

The reluctance of the show’s producers and vet to consign Betsy, Honey, and Meredith to lives in dairy production says a lot. After all, they had bought the cows in order to use them in a money-making venture. Yet, having gotten to know these animals as individuals, they balked at seeing them exploited in an industry setting.

Once at Farm Sanctuary, Meredith and her “moms” experienced their first true tastes of freedom. There was a huge barn to live in and pastures to explore, run through, and graze in.

Meredith going for a run in the pasture. (Photo by Connie Pugh.)

As a baby, Meredith was about as perfect as any calf could be. She loved to be close to her mom and Aunt Betsy, and would often frolic around them, both of her “moms” keeping a close eye on her to make sure she was always close by and safe. After Honey developed mastitis, Meredith’s second mom Betsy even started producing milk and feeding the young calf.

Meredith happily accepted! She nursed from Betsy until she had to be weaned in order to allow Betsy to recover before giving birth to her own baby, so she could produce the colostrum the calf would need.

Fortunately, by this time Meredith was at an age that she was able to be weaned. We fitted both moms with udder bras in order to stop Meredith from nursing, making sure to start her on a special mash so she wouldn’t be too upset by the loss of the milk.

Meredith enjoying her mash from her favorite green bowl.

As the days flew by, Meredith just continued to grow bigger and stronger! She loved to run and play in the barn and out in the pastures, still never straying far from the watchful gazes of her two moms.

Honey watches Meredith from a distance.

Meredith was having the time of her life living at the sanctuary, but little did she know, things were about to get even better! In February 2015, Betsy gave birth to a young calf we named Nutmeg. Meredith was so intrigued by this tiny calf that we had to keep her and Honey in a stall next door for a few days in order to give Nutmeg time to settle in to his new life.

Once they were able to be together, though, it was clear that nothing was going to separate these two calves. From their first day together, they were thick as thieves. In fact, they both try to steal mom Betsy’s food together at any opportunity — we even have to move them to a separate area for the duration of Betsy’s mealtimes! (Betsy needs a supplemental mash because she is still feeding both now-very-big babies — and that supplemental mash happens to be delicious.)

Meredith and Nutmeg have been inseparable since they were just wee calves.

Betsy and Nutmeg’s first outing in the pasture together — Meredith was so happy to have a playmate!

The family that grazes together stays together! Betsy and Nutmeg’s first outing in the pasture together.

After Nutmeg was born, Meredith happily began to nurse from Betsy again. This turned out to be a great thing, since she was so much bigger than Nutmeg and was therefore able to consume more milk. This meant that, between the two calves, they were able to empty Betsy’s udders so that she did not require additional milking. Had Nutmeg been the only calf nursing, his mom would have needed to be milked two additional times each day because the dairy industry has altered cows’ bodies to produce more milk than a single calf could possibly consume. Designed to nurture calves, the bodies of dairy cows have been altered to feed the human populace instead of their own young. But between the two calves, they were able to drink all of Betsy’s milk.

Above, a recently rescued Meredith nurses from Betsy, and below, a newborn Nutmeg also nurses off of Betsy.

Not a lot has changed in the nursing habits of these two now-very-large babies as you can see in the photo below. The only difference is they are now larger than Betsy is! We are leaving it up to Betsy, Meredith, and Nutmeg to decide when they will stop nursing.

Meredith has grown into a beautiful, intelligent, and loving lady. She currently lives with her “Utopia” family in the special-needs cattle herd at our Northern California Shelter.

Relaxing with her a few of her friends in the special-needs herd.

Soon, though, this family of four will join our main cattle herd now that Meredith and Nutmeg are growing up. For now, though, they enjoy gallivanting around the pastures they call home.

Meredith and Honey running through the pasture.

One thing that will never change is the relationship Meredith will forever be able to have with her mother, Honey. Meredith is likely the first calf that Honey has ever been able to keep for more than just a short time before being taken away. This amazing mom is fiercely protective of her daughter, even now that Meredith is no longer a baby and now even bigger than Honey.

Meredith loves her mom and loves to be close with her. (Photo by Savannah Rodriguez.)

Snuggles are a daily occurrence for this mother-daughter duo!

It’s impossible not to see the amazing bond Meredith and Honey share. (Photo by Savannah Rodriguez.)

Meredith, Honey, and Nutmeg going for a run together!

At play with mom and buddy Whitaker.

We have loved every minute of watching Meredith grow from a tiny calf into the amazing lady she is today. She is now bigger than both of her moms, but is still as sweet as the day she arrived at the shelter. She loves the freedom and love she experiences at Farm Sanctuary, and we love knowing that she and her family will be safe and loved for life!