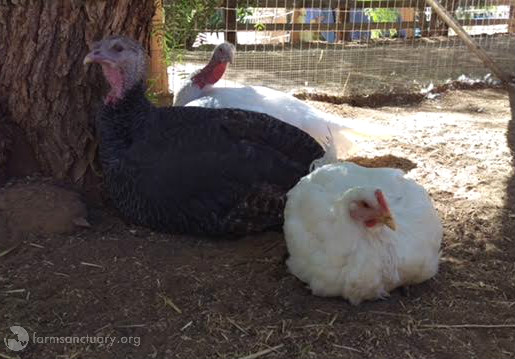 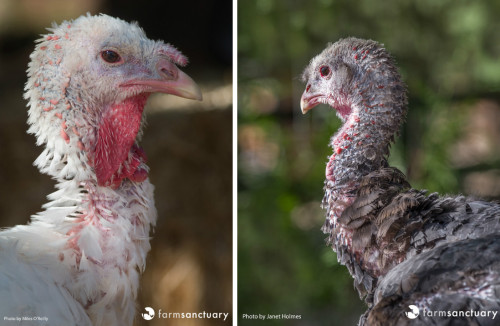 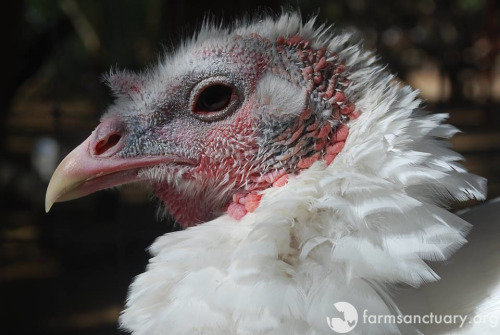 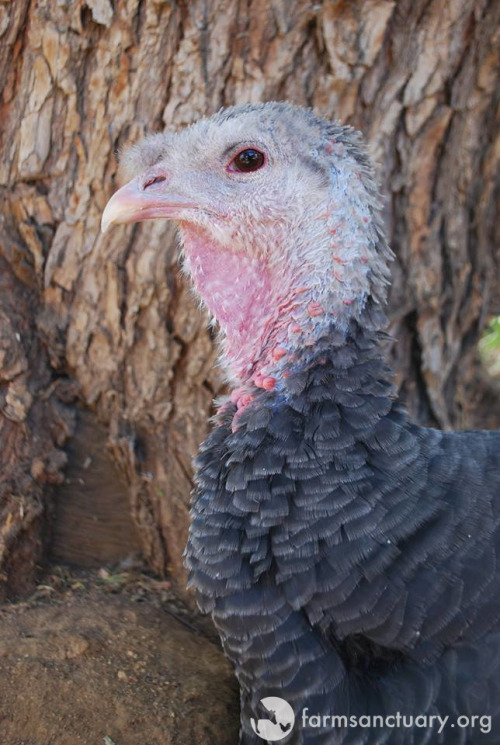 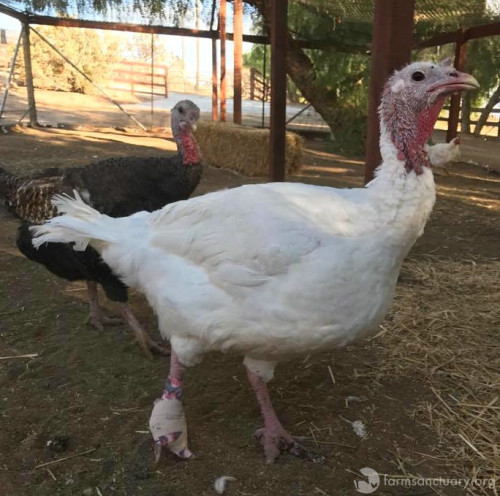 Sandy, pictured, and her friend Spunky quickly won the hearts of sanctuary staff members and volunteers.

During the evacuation period, we came across a backyard flock of chickens, ducks, and turkeys who were in desperate of a better home. The turkeys originally had been rescued last year to spare them from being killed for Thanksgiving. Unfortunately, though, the woman who rescued them was not knowledgeable at all about the needs of turkeys or other birds. As a result, the birds were not cared for well and horribly neglected. In addition to the lack of any medical care being provided to any of the birds, the ratio of male to female birds of each species was severely out of proportion, with many more males than females, resulting in all of the females being dramatically over-mated.

Sandy and Spunky, who are both commercial-breed turkey hens, were housed in a small enclosure along with four male commercial-breed turkeys. Unfortunately, this created an unsafe environment for both girls; we actually discourage housing commercial-breed male and female turkeys together. Because of their size, commercial-breed turkeys cannot mate naturally; in the industry, their reproduction occurs through artificial insemination. Male turkeys of this type have been bred to be so excessively large that, if they mount a female, she may be seriously injured, likely requiring surgery followed by a difficult recovery process.

Given that Sandy and Spunky were not living with a single male turkey, but four of them, it is a miracle that they both were not killed. Though alive, both girls were injured and in need of a lot of tender loving care and medical attention when they came to us.

Some of the damage to Spunky and Sandy’s feathers is shown above.

Among the issues they faced: Both girls were suffering from extreme feather loss on their backs and wings. Their backs were completely bruised. (To an untrained eye, it would have seemed that their skin tone was naturally blue and purple; the bruises were all-encompassing.) In addition to the bruising, both had old scars on their backs from the boys’ sharp nails, and one of Spunky’s old wounds was filled with pus and rotten tissue. Sandy suffered additional injuries to both of her feet, which were extremely swollen from long-infected and untreated bumblefoot.

Once in our custody, Sandy and Spunky received immediate medical attention. Both were started on pain medication and antibiotics and given space to heal without a male turkey in sight. And heal they have! Once allowed to live free from constant over-mating, the girls flourished. After a few weeks, their bruises faded, their wounds healed, and their feathers started to regrow.

Now, months later, the girls often flaunt their stunning, sleek feathers. Full, shiny, and healthy feathers adorn their beautiful bodies. (Sandy, who is nearly all white, even has one special feather with an onyx-like black quill!) They are able to enjoy their lives at last. They do not fear their flockmates; rather, they have made new friends.

Spunky has fallen in love with the boy next door: handsome Andy turkey, who is equally enamored of her. Andy often puts on an impressive display for Spunky, his snood and beautiful feathers dazzling his smitten lady friend. Since we do not house male and female turkeys together, they carry on their relationship through the fence that separates their enclosures. Through the fence, they cuddle, whisper sweet nothings to one another, and strut to their hearts’ content! This way, Spunky can enjoy the company of a male turkey without suffering the physical pitfalls created by the agricultural industry.

Another benefit of living in a safe environment is that Spunky is now able to express her true personality. As it happens, she’s a bit domineering! She lords over the other turkeys and hens in her flock, ensuring that she has first dibs on the best napping and sleeping spots, as well as any treats or affection. The other girls bow readily to their mostly benevolent leader, and Spunky relishes her new role.

The girls with their new friend Yolanda.

Sandy, on the other hand, has gained new friends through love and kindness. She and one of our other turkey residents, Madeline, are especially fond of one another; they usually sleep next to each other at night and often nap together during the day. Sandy also has befriended many of the Cornish hens with whom she lives, including our newest love Yolanda. Yolanda sometimes cuddles up with Sandy for warmth and companionship.

Sandy’s support system of bird and human friends is coming in particularly handy at the moment, as she is recovering from foot surgery. Although the infection she arrived with subsided after a month of treatment, she still had trouble walking, and radiographs revealed that a fair amount of scar tissue remained in one of her feet. (She had likely never received treatment for her infected feet before coming to Farm Sanctuary, resulting in the built-up scar tissue.)

Walking on the embedded scar tissue was akin to having a large rock stuck in a shoe and being forced to stand and walk on it. At best, she would have been in constant discomfort; at worst, the pain would have been excruciating.

As a result, she increasingly stood on her other foot, taking her weight off of the painful foot as much as possible. While we were managing the discomfort and/or pain with proper medication, pain management was not enough. Late in October, we made the difficult decision to have Sandy’s foot operated upon. The decision was difficult not because the necessity wasn’t clear, but rather, because birds do not always fare well in surgeries. The health benefit outweighed the possible risk, though, and Sandy underwent surgery. The scar tissue was removed, she fully recovered from the anesthesia, and the wound is healing right on schedule. The sutures are set to be removed next week, and we expect her to make a full recovery. Though she may suffer lifelong residual issues as a result of the neglect she suffered, she will not suffer. She will receive daily treatment, if needed, and lots of love and attention.

All animals deserve to be treated as individuals and have their individualized needs met, and birds are no exception. Luckily for Sandy and Spunky, they landed at Farm Sanctuary, where they forever will be treated and celebrated as the wonderful individuals they are.

This year, we’re thrilled to have Sandy and Spunky as two of our incredible turkey ambassadors through our annual Adopt a Turkey Project. For the past 30 years, we’ve encouraged people to participate in a compassionate holiday tradition by sponsoring one of our resident turkeys, helping us rescue animals and provide care for them at our sanctuaries, as well as educate and advocate for turkeys and other farm animals everywhere.

As a sponsor, you’ll receive a certificate like the one above (you can choose between a paper certificate sent by mail or an e-certificate via email); many sponsors tell us that they love displaying their certificate on their Thanksgiving table or giving sponsorships as gifts.

Interested in making Adopt a Turkey one of your holiday traditions? For just $30, you can sponsor Sandy or Spunky, or one of their fellow turkey residents: Kristoff, Marshall, Perdita, or Ruthie. Learn more here!