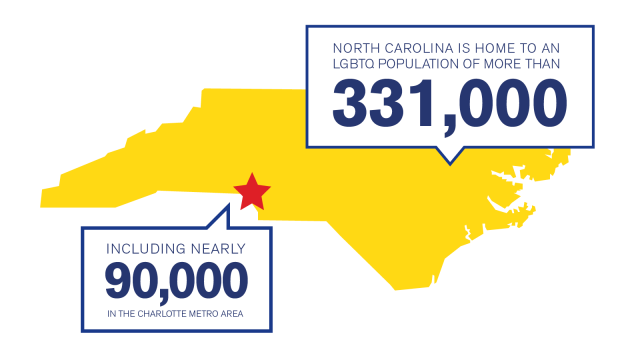 This November, a growing and highly engaged LGBTQ voting bloc in North Carolina will play a pivotal role in the presidential, gubernatorial and other down ballot races. Today, there are an estimated 331,412 LGBTQ adults1 living in North Carolina — a substantial population given that the state was won in the last three presidential elections by an average of 180,500 votes2. This November, there are 9.4 million LGBTQ people of voting age in the United States. Turnout among LGBTQ voters is also reliably high. In 2012, an astounding 81 percent of eligible LGB voters nationally cast a ballot, compared to just 58 percent of all eligible voters. This bloc was a crucial piece of the puzzle for President Obama’s victory: in the last election, President Obama received 76 percent of all LGB votes, according to national exit polls3. In total, roughly 6 million LGB voters cast a ballot in 2012 — an election President Obama won by just under 5 million votes.4

HB2 is Galvanizing the LGBTQ Vote
No issue is more profoundly motivating to LGBTQ voters across North Carolina than Governor McCrory’s hateful HB2 law. In the months since North Carolina Gov. Pat McCrory and state lawmakers rammed through the anti-LGBTQ law — which also targeted millions of other minorities, women and people of faith across the state — the real harms and economic consequences have continued to mount. Donald Trump and Mike Pence, who have both endorsed Governor McCrory and backed his hateful HB2 law have added more fuel to the electoral fire in favor of pro-equality candidates. HB2 is an issue that also resonates with countless fair-minded voters around North Carolina. While Gov. McCrory continues to face backlash over his discriminatory HB2 law, the reality is that a majority oppose the law/think the law should not have passed, and a 64 percent majority of North Carolina voters support a statewide LGBTQ non-discrimination law. Today, only 30 percent of North Carolina voters support HB2 law, and, by a 12-point margin, voters say Governor McCrory’s handling of HB2 makes them less likely to cast a ballot for him. In an August poll, a stunning seven in 10 North Carolina voters said HB2 has been bad for the state’s reputation. The economic fallout from HB2 has also continued to grow as Gov. McCrory refuses to fix the mess he and state Republican lawmakers created — further antagonizing the business community and voters across the state. In total, the reckless, discriminatory law has cost the state an estimated $448 million in economic loss. The NBA, which took a strong and public stand for equality by announcing that it is moving its 2017 All Star Game from Charlotte to New Orleans — a move which cost NC an estimated $100 million. The NCAA and ACC have since followed suit, pulling their championships from the state because of the dangers faced by players, employees and fans. More than 200 major CEOs and business leaders, including those representing many of North Carolina’s largest employers, have called for full repeal of HB2 because of the risk the law poses to their employees and customers. Dozens of conventions and performers have pulled out of the state citing similar concerns.

Trump & Pence: Not Helping
North Carolinians will see three of the worst anti-LGBTQ politicians in America on their ballots this fall: Donald Trump, Mike Pence, and Pat McCrory.

In recent weeks, Donald Trump has not only endorsed HB2, but campaigned with Gov. McCrory, calling him a “great governor” who’s “doing a fantastic job.” Gov. McCrory introduced Trump at one such campaign event by cracking bathroom jokes and making light of the harm he’s caused. Making matters worse, Mike Pence is one of the only governors across the nation with a potentially more dismal track record of promoting LGBTQ discrimination than Gov. McCrory. The anti-LGBTQ cred Trump and Pence bring to the ticket includes: LGBTQ and pro-equality voters are also looking to the top of the ticket for an ally who will keep building on the progress of the last 8 years, and crucially, sign the Equality Act into law. Hillary Clinton has laid out the most robust plan for advancing LGBTQ equality of any presidential candidate ever — from championing the Equality Act, to wiping out HIV, to addressing hate violence and more.

Most Americans are unaware that today, in 31 states — including North Carolina — LGBTQ people are still at risk for being hired, fired, evicted or denied services because of who they are. The Equality Act, a top priority for LGBTQ voters, would rectify that by adding these protections for LGBTQ people into our longstanding civil rights laws. This law has bipartisan backing in Congress and the support of more than 80 leading companies — and the nonpartisan Public Religion Research Institute (PRRI) found this year that 71 percent of Americans favor such a bill. In fact, 84 percent5 of all voters already believe it’s a law we already have on the books. What’s more, there is little support for HB2-style laws nationally. PRRI’s August poll found 64 percent of voters nationally oppose HB2-style laws, while only 35 percent support them.

The choice for pro-equality voters is clear and, in North Carolina, their votes will make the winning difference.

1Derived from state by state analysis on percentage of LGBT population released by Gallup and compared with overall state population. Gallup report (http://www.gallup.com/poll/160517/lgbt-percentage-highest-lowest-north-dakota.aspx ) is co-authored by Gary J. Gates, a national expert in LGBT demographics, and the Williams Distinguished Scholar at the Williams Institute, UCLA School of Law.

4The 2012 NEP reported that 5% (http://elections.nytimes.com/2012/results/president/exit-polls) of the 129,085,403 voters (http://www.presidency.ucsb.edu/data/turnout.php) in that election identified as gay, lesbian, or bisexual, which means that approximately 6,454,270 voters identified as LGB. According to the Williams Institute (http://williamsinstitute.law.ucla.edu/wp-content/uploads/Gates-How-Many-People-LGBT-Apr-2011.pdf), there are about 8 million LGB adults in the United States. 2012 LGB voters then participated at a rate of 81% compared to the LGB voting-age-population.