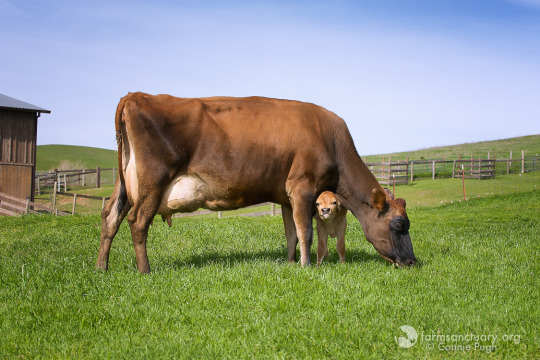 For dairy-industry survivor and retired TV star Betsy cow, the road to sanctuary must seem very long indeed. Betsy spent her early life as one of the more than nine million cows used to produce milk in the U.S. each year. The life of a dairy cow is a heartbreaking one marked by loss, but fortunately for Betsy and her friend Honey, their lives took a turn that eventually led them to sanctuary. Betsy enjoys some attention from her friend Bruno. Nearly two years after Nutmeg’s birth, Betsy is still nursing both him and her “niece” Meredith. The girls were purchased from the dairy farm on which they lived by TV producers working on a reality series called “Utopia.” The two were to be used for their milk on the show, and Honey gave birth to a daughter we later named Meredith (the show’s contestants gave her the name “Ca$h”) during production. When “Utopia” was canceled, though, the family needed someplace to go. Fortunately, the show’s veterinarian advised against sending them back into the dairy industry, and producers agreed that the family deserved a better life. They contacted Farm Sanctuary, and soon, Betsy, Honey, and Meredith were headed to their forever home at our Northern California Shelter.

And there was one more family member on the way: Betsy was pregnant. Not only that, but this amazing mom was also helping to care for Meredith because Honey had developed painful mastitis, which prevented her from nursing. Without batting an eye, Betsy stepped in and took over for Honey — caring for Meredith as her very own.

A very pregnant Betsy investigates a new pile of hay to eat.

It is unlikely that either Betsy or Honey ever got to know any of the babies they gave birth to in the past. In the dairy industry, babies are routinely separated from their mothers shortly after birth. So when Meredith was not completely taken away during “Utopia’s” production, we can only imagine the love and care they both poured into the little calf — protecting her at all costs and never wanting to be far from her.

Betsy letting Meredith nurse just hours after being rescued.
Betsy was never far from Meredith’s side

she was like a second mother to her, and still is to this day.

Betsy and Meredith enjoying some quality time together.

As Betsy’s due date drew closer, we started preparing for the arrival of her own calf — the first (and last, since we never allow breeding at our shelters) baby she would give birth to who would never be taken from her. We wondered if she was scared that she would have another baby taken away, and enthusiastically waited to show her that this would never be the case.

On February 9, 2015, Betsy gave birth to a healthy baby boy whom we named Nutmeg. Betsy was very protective of Nutmeg — especially in the beginning. When we entered the barn, we could see in her eyes the fear that she was about to lose another baby. She seemed almost confused when we left and Nutmeg was still standing there right in front of her — only now with a coat on. She immediately ushered Nutmeg behind her, and continued to care for him.

Betsy with newborn Nutmeg in his tiny coat.

Betsy’s udders shortly after giving birth. In the dairy industry, cows’ bodies have been altered to produce more milk than a calf could possibly consume on his or her own. Fortunately, between Nutmeg and Meredith, they were able to drink all of Betsy’s milk so that she didn’t require additional milkings.

Nutmeg peering out from under Betsy’s neck. (Photo by Connie Pugh.)

It took nearly two weeks before Betsy returned to her usual friendly self around the “humanimals” at the sanctuary. Prior to that, she would walk nervously around Nutmeg and anxiously watch everything we were doing — scared that this could be the time that he was going to be taken. Then, one day, her fear seemed to cease. Instead of nervously hovering around Nutmeg and eyeing us distrustfully, she calmly ate some hay and watched us with more curiosity than anything. And happily, this proved to be the start of a new trend. Betsy would allow us to love on her and her beloved baby at any time, and would often moo for us to come in if she heard anyone outside the barn — especially if it was around mealtimes.

“Hello, human — welcome to the barn!”

Betsy had her baby, and she would never again have to worry about him being taken away. On top of that, she had her best friend Honey beside her, as well as her surrogate daughter Meredith! This family of four had hit it big, and they eagerly embraced Farm Sanctuary life together.

Betsy is still never far from her immediate family, even though she now has even more family and friends to love in the special-needs cattle herd of which they are now members.

Betsy loves having room to roam and her favorite bovine and human friends nearby. (Photo by Savannah Rodriguez.)

Betsy loves her new family and friends — and shows it on a daily basis. She loves to groom everyone, and has taken it upon herself to make sure that everyone always has a clean face to show the world.

Betsy has even made some other friends of the farm. When we were temporarily caring for two young piglets before their adoption through our Farm Animal Adoption Network (FAAN), Betsy decided that introductions were necessary and took it upon herself to say hello. Even though it was through the fence, she seemed pleased at how well the meeting went.

We are so happy that Betsy has settled in to sanctuary life so well. It is apparent that she feels safe and happy here, surrounded by her immediate and extended family (which also encompasses her human friends).

Betsy loves getting attention from her human buddies, and especially loves it when they come bearing her special supplemental mash feed. (Since she is still nursing Meredith and Nutmeg — we’ll let them decide when it’s time for weaning — she needs additional calories to help her stay at a healthy weight.)

She is often waiting at the gate first thing in the morning for a shelter staffer to bring her her special mash.

Betsy chowing down on her special feed.

We’re not sure whether it’s more rewarding for Betsy or for us when she gets her mash, though. She obviously loves it, but we also love seeing how happy it makes her. It’s a win-win!

Betsy and Nutmeg hanging out side by side in the special-needs cattle pasture.

We are thrilled that these are the things that encompass Betsy’s days now —eating foods she loves, hanging out with her bovine and human families, and enjoying all the freedom that Farm Sanctuary life entails

— and that she will get to spend the rest of her life enjoying them.

Please share Betsy’s story. Together, we can encourage awareness and understanding about the deep emotional lives of cows as well as the unfortunate truth about the dairy industry. With a growing number of delicious dairy-free options, it’s never been a better time to make the switch. And it is one of the easiest ways to honor cows like Betsy. With your support, we can continue to promote compassionate vegan living through rescue, education, and advocacy efforts. A compassionate world begins with you!